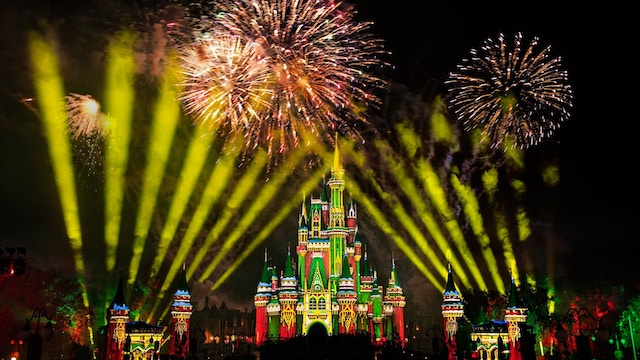 This morning Walt Disney World shared plans for this holiday season including a new afterhours party at the Magic Kingdom.  Here’s a preview of all the holiday fun.

Disney Very Merriest After Hours, a new special-ticketed event, will debut Nov. 8 before all the rest of the festive fun. It will be available on select nights through Dec. 21. The four hours of festivities will delight guests with “Minnie’s Wonderful Christmastime Fireworks,” Disney characters throughout the park, holiday music and décor, treats included and so much more! As with other Disney After Hours events, a limited number of tickets will be sold for this event. It’s held after regular park operating hours, with lower wait times and access to more than 20 select attractions.

Holidays are sure to be enchanting at Magic Kingdom, where decorations will return to Main Street, U.S.A. When the sun sets, special holiday projections will appear most nights on Cinderella Castle, alternating periodically with the castle’s transformation into a Beacon of Magic. What a great way to celebrate the holidays and the 50th anniversary of Walt Disney World Resort!

Sunset Seasons Greetings returns to Disney’s Hollywood Studios, as the Hollywood Holiday Tower Hotel on Sunset Boulevard will twinkle once again with projection effects, magically transforming into a snowy corner of Arendelle, a Muppets gingerbread masterpiece, a Toy Story toy hotel, and a Dickensian village inspired by “Mickey’s Christmas Carol.” This holiday show will also alternate with the tower’s nightly transformation into a Beacon of Magic.

Santa Claus will bring some North Pole cheer to a motorcade down Hollywood Boulevard. You will also be able to enjoy “For the First Time in Forever: A Frozen Sing-Along Celebration,” with its festive finale featuring everyone’s favorite snowman, Olaf. Minnie Mouse is also returning to host her festive meal at Hollywood & Vine at Disney’s Hollywood Studios. Minnie and her friends will be donning their holiday best – even Santa Goofy will be there! And throughout the season, vintage-themed holiday décor will shine bright across the park.

It will be a wild holiday time at Disney’s Animal Kingdom Theme Park with the return of seasonal décor and festive Disney character flotillas sailing down Discovery River to the sounds of joyful songs of the season. The park’s centerpiece – The Tree of Life – becomes another Beacon of Magic most nights during the 50th anniversary celebration. During the holiday season there’s even more magic inspired by nature as the holiday edition of Tree of Life Awakenings also takes place most nights.

Where can you enjoy traditions from around the world, with inspiring music, tasty treats and family-friendly experiences? If you guessed EPCOT … … you are correct! The EPCOT International Festival of the Holidays will return this year, from Nov. 26 – Dec. 30, with Holiday Kitchens around the park, performances by Voices of Liberty, the guest favorite Cookie Stroll and more!

You can happily discover whatever you’re after this holiday season at Disney Springs. The shopping, dining and entertainment destination will transform into a winter wonderland, full of sparkling lights, enchanting décor and holiday surprises. This year sees the return of the Disney Springs Christmas Tree Stroll, with elaborately decorated, Disney-themed trees – some new and some inspired by “The World’s Most Magical Celebration.”

A magical snowfall will add a touch of wonder for holiday shoppers in Town Center.