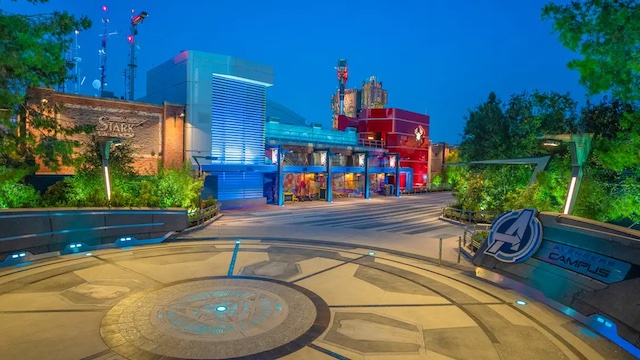 Avengers Campus is an entirely new land dedicated to discovering, recruiting and training the next generation of Super Heroes at the Disneyland Resort inside Disney California Adventure Park. This new land brings together Earth’s Mightiest Heroes for the common good and allows guests to team up with the Avengers and their allies, sling webs with Spider-Man, taste-test inventive food and drinks and become part of a bigger universe. Kids and guests of all ages will find their powers as they unite with family and friends to take an active role alongside some of their favorite Super Heroes, with a chance to live out their own heroic story.

Guests who visit Avengers Campus may encounter heroes and villains throughout the land including:

WEB SLINGERS: A Spider-Man Adventure is a new, action-packed escapade that invites guests to put their web-slinging skills to the test, a feat accomplished with innovative technology adapted specifically for this attraction. The mission: team up with Spidey and help capture the out-of-control Spider-Bots before they wreak havoc on the Campus. This family-friendly attraction blends physical sets and virtual environments to take new recruits on an interactive adventure. There is no height requirement for this attraction, allowing aspiring young heroes to join the fun.

Throughout Avengers Campus, Super Heroes come to life in ways that are more exciting than ever. At Avengers Headquarters, guests may have a chance to see Black Panther, Black Widow and Captain America face off with a villainous foe. Or, they may witness Spider-Man defying gravity as he flips 60 to 65 feet in the air above the rooftop of the Worldwide Engineering Brigade, a.k.a. the WEB building, then descends along the building to wave hello. Also, outside at Avengers Headquarters, recruits can train with Black Panther’s loyal bodyguards, the Dora Milaje, to learn from the warriors of Wakanda and what it’s like to be a member of this elite royal guard. This training encounter is led by Okoye, the leader of the Dora Milaje, the first time Okoye has appeared in a Disney park.

When it is time to take a break from the heroics, four new dining spots will offer sustenance. At Pym Test Kitchen featuring Impossible™, Ant-Man and The Wasp are applying “Pym Particles” to the innovative science of food creation. This growing and shrinking technology allows Pym Test Kitchen to showcase normal foods at unusual scales, including shareable bites, inventive-sized entrees and tiny treats. Guests may taste foods like the Impossible™ plant-based large and micro meatballs with pasta and the “Pym-ini” sandwich. They will also find Pingo Doce, the distinctly green beverage from Avenger lore.

Next door at Pym Tasting Lab, an oversized beer can overhead signals that grown-up beverages are available. Guests may order craft beers ranging from a pilsner cold-fermented lager to an amber ale. These are poured from unique beer taps where, thanks to the food scientists, the glasses fill from the bottom up. Particle-infused cocktail experiments, beer cocktails and bite-size Snack Molecules are also featured.

The Avengers brought the Shawarma Palace, featuring a favorite food that was discovered after the Battle of New York, to Avengers Campus for guests and Super Heroes on the go. This food cart, which is decked out in memorabilia for Avengers fans, offers hand-held savory wraps with flavorful chicken shawarma and garlic sauce, or the Impossible™ plant-based falafel wrap.

For Super Heroes-in-training looking for something sweet, Taneleer Tivan has curated a weird and wonderful menu of intergalactic eats at Terran Treats. Churro spirals with unique flavors, and a cosmic orb with an outer shell revealing a decadent creamy filling, are just a few takes on what concoctions he has conceived to lure guests to his Fortress.

At WEB Suppliers, a hot item is the WEB Power Band, which allows guests to customize their experience on WEB SLINGERS: A Spider-Man Adventure and change their powers on the attraction. This base band features a special mode that unlocks multi-fire webs aboard the attraction to customize the game play and for enjoyment at home.

Guests will also find superhero swag, items to tinker with at home and something every hero needs – a friendly sidekick: Spider-Bots. Additional items at WEB Suppliers include a specially designed backpack to carry and show Spider-Bots, stylish Spider-Man goggles that light up and interact with their surroundings, Web-shooters that come to life with lights and sounds and Funko Pop! vinyl figurines of Spider-Man and Iron Man.

The Campus Supply Pod is the place to power up with official Avengers Campus gear including performance fleece hoodies and tees, headwear, drinkware and Super Hero supplies.

These popular items may also be found at the Disneyland Resort Backlot Premiere Shop featuring Avengers Campus in Hollywood Land.

At The Collector’s Warehouse located at the base of Guardians of the Galaxy – Mission: BREAKOUT! attraction, recruits will find cosmic keepsakes that The Collector has acquired from his travels, including comic books, Super Hero costume-style and graphic t-shirts, action figures and collectibles such as trading pins and artwork.

Margaret’s Top 5 Things To Do At Disneyland (That You Can’t Do At Walt...
Scroll to top